The Bearhawk Patrol is a high wing aircraft designed for comfort, endurance and fun. The generous proportions of the cabin provide plenty of room for just about any sized pilot, a passenger (or two if they are small) and gear. The large baggage door ensures the ability to easily load your cargo.

The available visibility is outstanding both on the ground and in the air. The patrols flight controls are light and very responsive at cruise and slow speeds. Low landing speeds are further enhanced by the use of the 18 ft. span, manually operated flaps (up to 40 degrees).

The Patrol can stay aloft for a very long time. With an O-360 Lycoming pulled back for maximum endurance, a steady 100+ mph can be maintained for nearly nine hours. Or at a more brisk 150+ mph pace, you have more than five hours endurance. The Patrols 55 gallon fuel tanks allow it to reach many remote locations and return home safely. The Bearhawk Patrol is everything that made the Super Cub famous and has significantly greater speed, climb rate and endurance. Factually, the Patrol has three huge advantages over a SuperCub. First, there is NO opportunity for a Moose stall. The slow flight characteristics are amazing and it won’t spin unless you force it. Second, there is a huge baggage door, since the longerons are up higher in the structure. Third, it’s 40 miles per hour faster in cruise.

Most importantly, the Patrol is FUN! It is considered to be a Fast Super Cub. The remarkable performance is easily utilized by the average pilot. The stick controls connect the pilot to the aircraft in a way that a yoke cannot. The Patrol can land in many fields that you would not even consider with other airplanes, making it an exceptional bush flying plane. Furthermore, this stout airframe has experienced a very satisfying test program for intermediate aerobatics with a crisp roll rate and responsive handling. The Patrol’s versatility opens a whole new world of aviation to the private Canadian pilot.

The Bearhawk Patrol can accept engines from 115hp to 210hp. The prototype is powered by an O-360 Lycoming 180hp engine swinging a fixed pitch aluminum propeller. N289R was later fitted with a C/S prop. The fabric covered steel tube fuselage is a time proven way to build a strong and durable structure. The all aluminum, flush riveted wing features a Riblett 30-413.5 airfoil and available 40 degrees flap setting.

The Patrol is a recent, original design of Robert Barrows of Fincastle, Virginia. Both aircraft are designed to the equivalency of Utility Category standards for increased structural strength and enhanced capability for unimproved airstrips. A 180hp Patrol has a cruise speed (60% power) of 140 MPH, a takeoff roll of 250 feet and a landing speed of 35 MPH. The wing span is 33 feet. Cabin width is 32 inches. The Patrol has a 1,050 pound useful load (depending on a builder’s equipment selections), if built to Utility Category equivalency as designed. 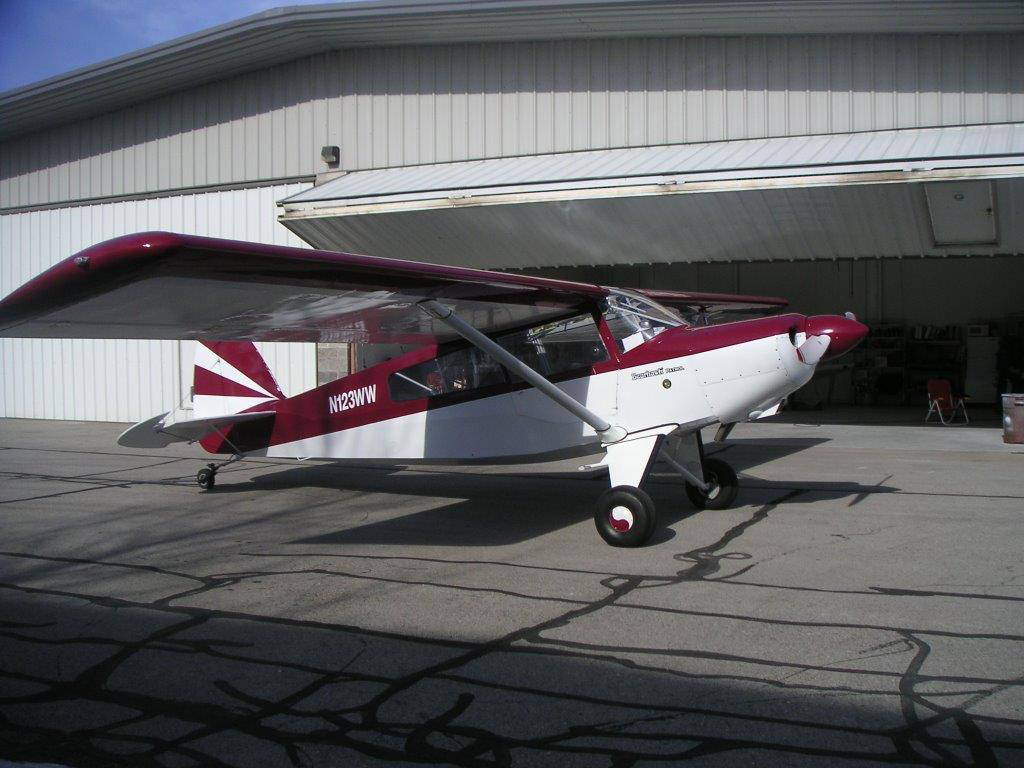 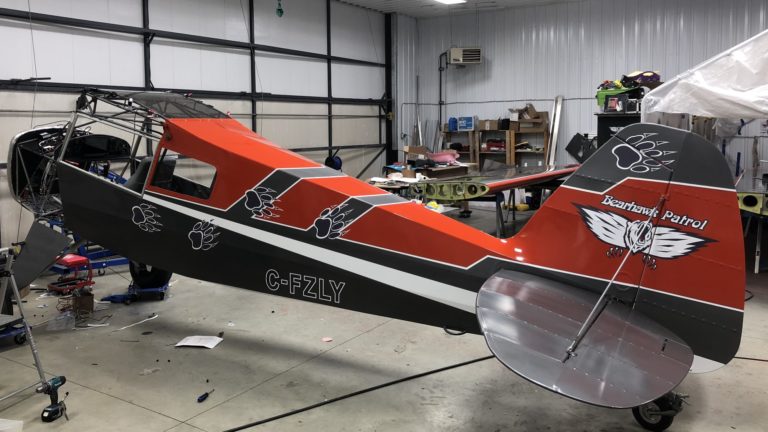 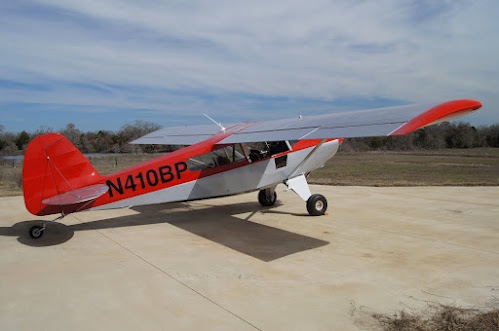 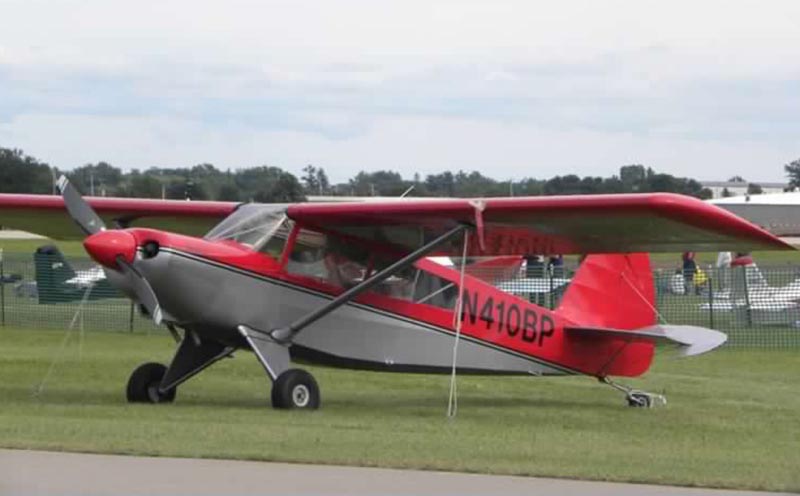 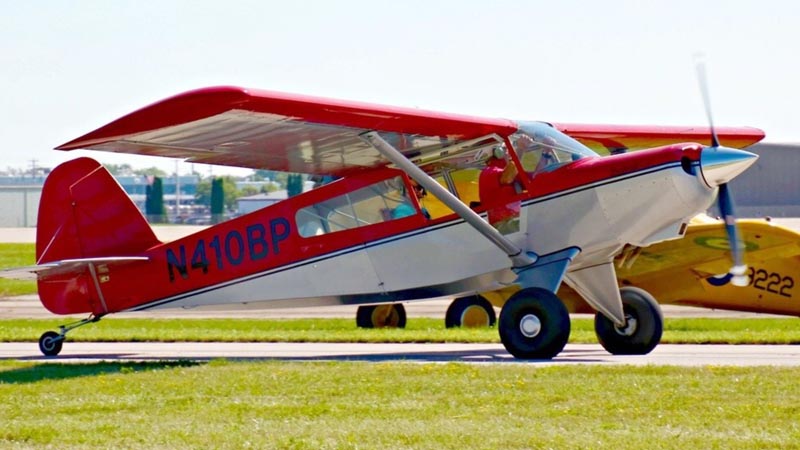 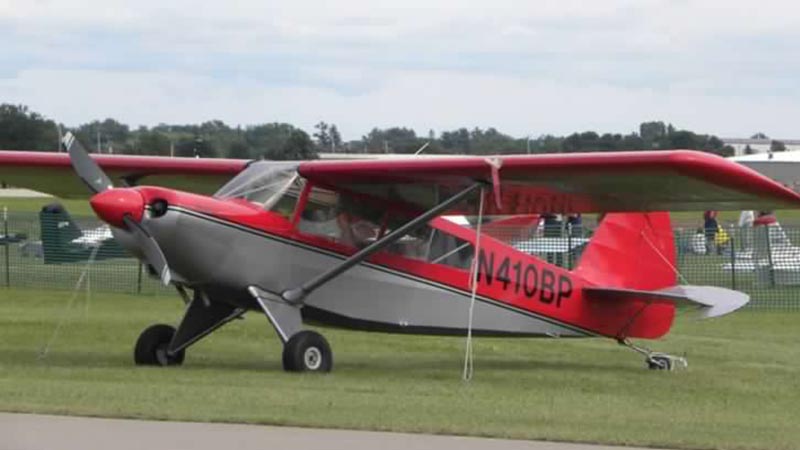 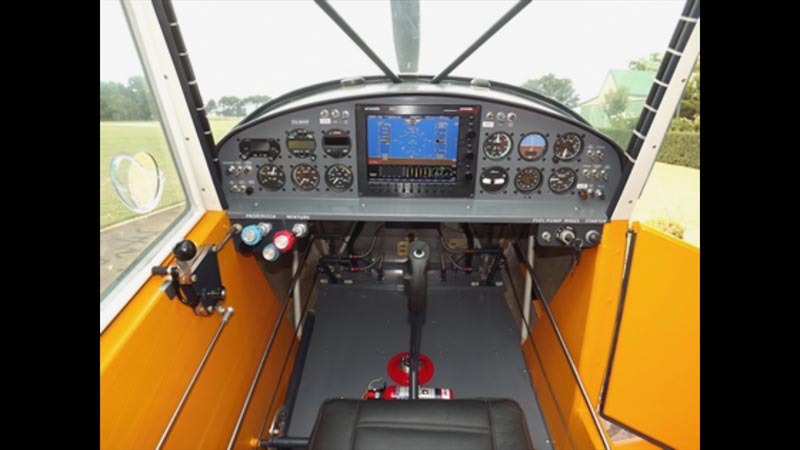 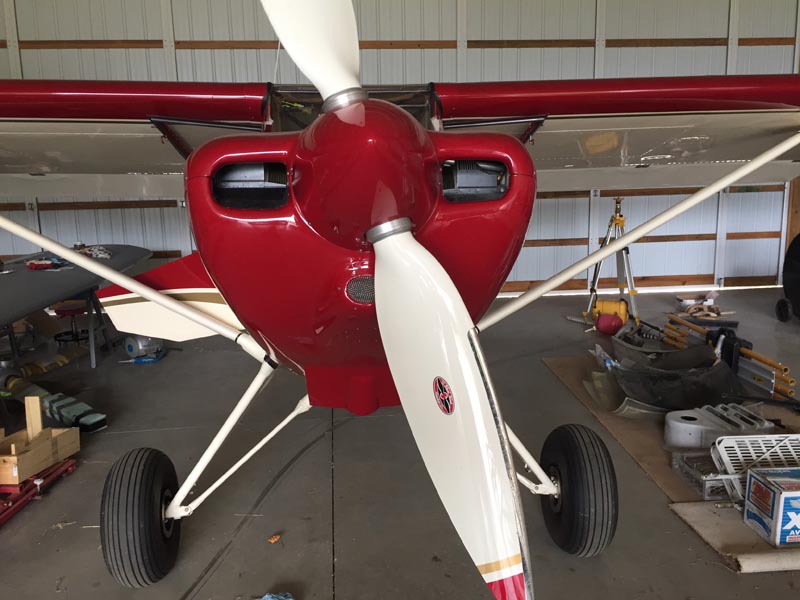 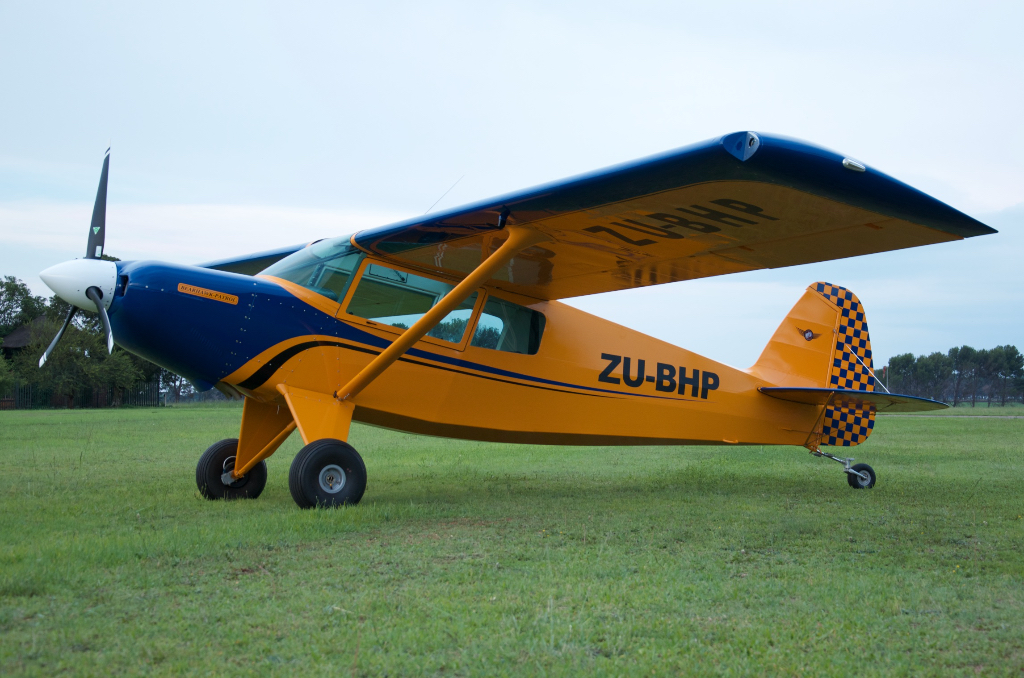 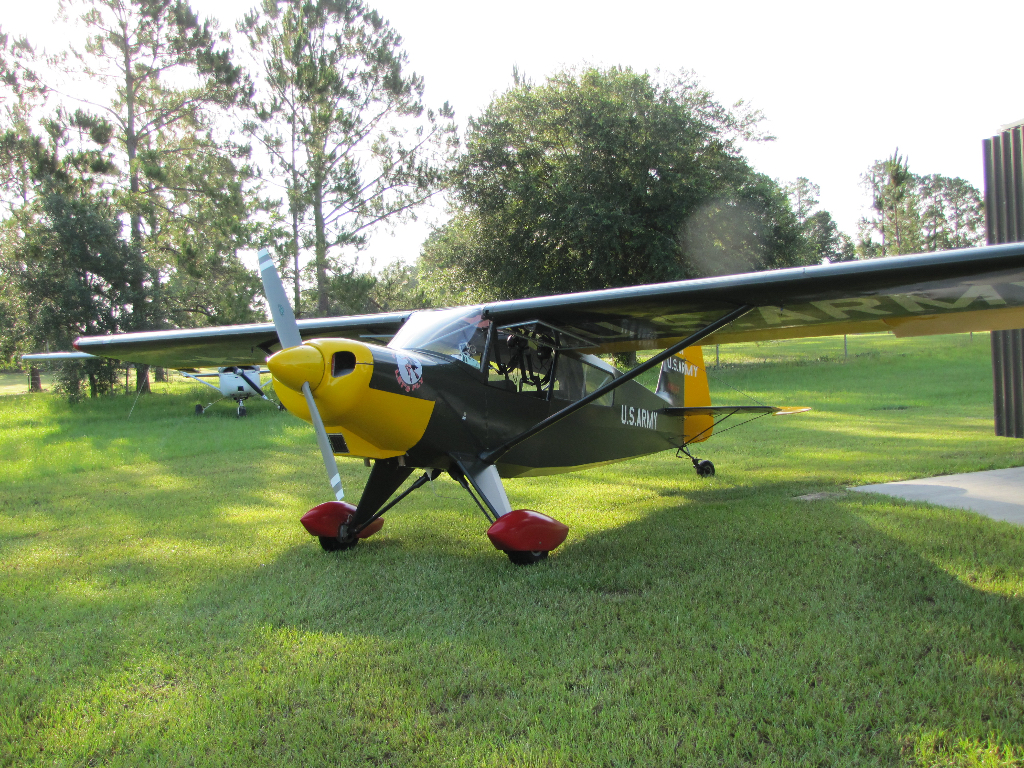 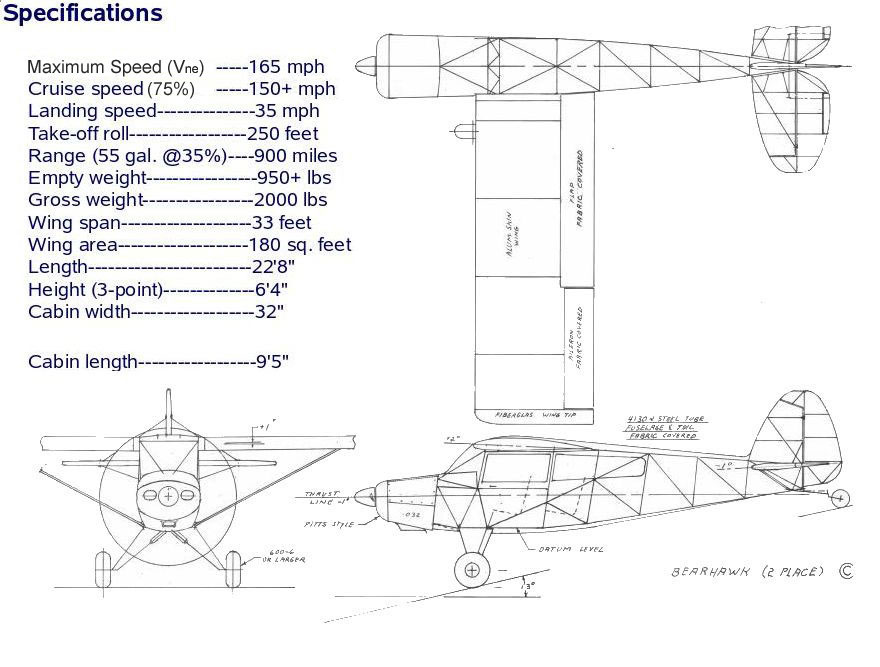 The Piper PA18 Super Cub is probably the most appreciated and proven back country utility plane in the history of aviation. Since the 1950s, pilots’ lives have depended on the ruggedness and short field ability of the PA18. Perhaps no other airplane has a more devoted following because of the 60+ years of service in the back country. Today, there are many original Super Cubs still flying, and also many Cub “clones” with various design modifications attempting to improve on the 1949 original design, which itself could trace its development all the way back to the E-2 Cub of the 1930’s. The Super Cub wasn’t actually designed but evolved slowly out of the long line of Cub models that had existed before.

It has been suggested by some that if the PA18 were designed again today, it would look a lot like the Bearhawk Patrol. Bearhawk Aircraft would like to outline some of the differences in the original Super Cub design and engineer Bob Barrows’ 2004 design work that ended up being the Bearhawk Patrol. We know that the PA18 has a loyal following, but let us highlight some of the design and performance characteristics of the two planes. It should be mentioned that a certified PA18 can be used for commercial purposes, and the  experimental aircraft BH Patrol (or PA18 clone) will always be only a personal use airplane. However, owning and operating an experimental category plane does have many advantages for the private pilot. Our hope is that pilots objectively looking for a two place tandem utility plane will find a new Bearhawk Patrol to be a desirable alternative.

(1) An all aluminum skin, flush riveted wing is the strongest for its weight, has the most efficient drag characteristics because of the consistent wing shape (with no scalloping between ribs) and lack of rivet heads in the breeze. Throttled back to Super Cub cruising speeds, a Bearhawk Patrol will have at least a 30% fuel savings when compared to a PA18.

(2) Developed by Bob Barrows with airfoil designer Harry Riblett, this airfoil is a turbulent flow airfoil designed for back country flying and great stall characteristics. Very little pitching moment requiring minimal trim changes. At low airspeeds, will not produce the “moose turn stall”. This airfoil and wing structure are the main reasons for higher cruise speeds. Another major factor in the higher cruise is the single wing strut as opposed to the double struts required on fabric covered wings.

(3) Oil dampened spring shocks are very strong and do not have the tendency to bounce you back in the air. They “stick” very well upon touchdown.

(5) The only way to really compare stall speeds is to do a wingtip to wingtip slow speed test. In 2012, Bob Barrows did this test flying next to a Northstar Cub with 190 sq ft of wing area. The stall break for both happened at the same speed/time. It was a tie with neither plane having a slower stall speed.